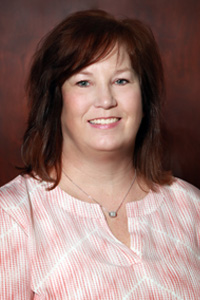 A student in Northwestern College’s online RN-BSN program has been named among the 100 Great Iowa Nurses of 2018. Sara Ruhlmann of Solon, Iowa, will be honored at a ceremony in Des Moines on May 6 as part of National Nurses Week.

Ruhlmann, director of nursing at Oaknoll Retirement Residence in Iowa City, was nominated by her administrator and by the daughter of one of the residents she serves.

“I am so honored to be nominated for this award and very thankful to have been chosen as a recipient,” says Ruhlmann. “It is very special to have the respect of those you work with as well as those you take care of.”

Dr. Karie Stamer, director of Northwestern’s RN-BSN program, says she understands why Ruhlmann was nominated for the prestigious award. “I’ve found her to be dedicated to those she cares for, eager to learn and apply her new knowledge, and willing to push herself through new challenges. We’re very excited to have her in our RN-BSN program and to be playing a role in her growth as a nurse.”

Ruhlmann, who has been employed at Oaknoll for more than seven years, is completing her first semester in Northwestern’s program. She earned an associate’s degree in nursing at Kirkwood Community College and has more than 20 years of experience working in long-term care.