Michelle Van Wyhe, an instructor of nursing and nurse practitioner at Northwestern College, has earned a Doctor of Nursing Practice (DNP) degree from South Dakota State University after successfully defending her doctoral project on July 12. 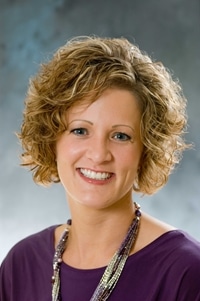 The DNP is the highest degree available for nurse practitioners and emphasizes the clinical aspects of nursing rather than academic research. According to Van Wyhe, the nursing profession is phasing out master’s degrees for nurse practitioners, with the intent that, by 2015, all nursing students pursuing graduate degrees would move directly from a baccalaureate to a doctorate.

The Doctor of Nursing Practice is a new program for SDSU; Van Wyhe’s cohort was the first to graduate from the university with that degree. Her project involved building a walking trail around the northwest Iowa town of Ireton, with the intention of demonstrating the impact of an environment—like a walking trail—on a population’s physical activity.

“We did a baseline survey prior to the implementation to determine what the current physical activity levels of the citizens were,” Van Wyhe says. “We’ll do that survey again in a year. The goal is to get people more physically active and healthier, and therefore to decrease chronic disease like heart disease and diabetes.”

To build the trail, Van Wyhe assembled a team of volunteers and collaborated with the town of Ireton. The trail is a five-year project, with funds coming from grants and donations, including a group of boys who sold lemonade throughout the summer of 2011 to raise $200 for the trail.

Van Wyhe and her committee were able to complete phase one—a half-mile concrete path on the north side of town—by her graduation from SDSU. Eventually the trail will circle Ireton and connect to schools, Main Street, the park and the swimming pool.

“I’ve had a lot of opportunities to visit with other towns on how they started their walking trails and their usage,” Van Wyhe says. “We’ve even had interest from some of the smaller surrounding towns—such as Maurice and Hawarden—that would like to see us connect the towns together.”

Van Wyhe joined Northwestern in 2007 to teach nursing courses and serve as a nurse practitioner for the college’s Wellness Center. A graduate of Augustana College in Sioux Falls, she previously worked as an obstetrics nurse at St. Luke’s Hospital in Sioux City and as an Early Head Start health coordinator for Mid-Sioux Opportunity in Remsen, Iowa. She also served as a registered nurse for the Orange City Area Health System while earning a master’s degree in nursing from SDSU.