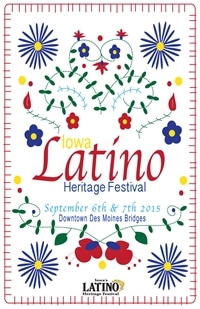 A design by Northwestern College student Elizabeth De Jong has been selected to represent Iowa’s Latino Heritage Festival next year. De Jong’s design will be used to promote the festival on posters and postcards around the state and will earn her a $1,500 cash prize.

Iowa’s Latino Heritage Festival is an annual September event that takes place on the bridges in downtown Des Moines and is the state’s largest festival celebrating the diversity and appreciation of the Latino culture. Organizers seek to provide a family-oriented event filled with learning through music, dance, food, children’s activities, arts and cultural exhibits from various Central and South American countries.

A senior business administration/marketing major from Orange City, De Jong came up with the design as part of an assignment for an advanced graphic design course taught by Phil Scorza, instructor of art.

As the students researched the festival and Latino heritage, they found that earthy, handmade imagery or objects are prevalent in Latino culture.  De Jong researched the fabrics and embroidery used in clothing, among other things. “I saw a lot of elaborate, colorful outfits and thought it would be fun to mimic those in my design,” she says. Her artwork uses flowers and intricate patterns to imitate embroidery. “I wanted it to look as realistic and authentic as possible.”

The result, says Scorza, is a poster that looks nearly handmade. “The ‘digital embroidery’ design Elizabeth employed is crisp and clean but still with enough quirky variation in the design to give the organic look she was trying to achieve,” he says.

The daughter of Brad and Jana De Jong also recently won a contest to design the poster for the 2014 Orange City Tulip Festival Night Show. She plans to intern through the Chicago Semester next spring and, following graduation, pursue a career in which she can use her skills in marketing, social media and graphic design.