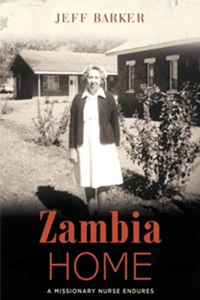 Jeff Barker, professor emeritus of theatre at Northwestern College, has completed his third book about a Sioux Center woman who spent 33 years as a missionary nurse in Africa.

“Zambia Home: A Missionary Nurse Endures” tells the story of Arlene Schuiteman’s final decade of service in the Republic of Zambia, where she taught health care workers in two rural hospitals. It then follows her as she returns to Iowa, faces a major health crisis, and experiences the death of a dear friend and colleague.

Barker’s relationship with Schuiteman began in 2005 when he wrote a play about her first assignment in Africa titled “Sioux Center Sudan.” That script was followed by two more plays: “Iowa Ethiopia” and “Zambia Home.”

In 2014, when Schuiteman turned 90 years old, she entrusted Barker with complete access to her journals, in which she’s recorded—nearly daily—the events, relationships, and spiritual questions and insights she’d experienced. Barker began work on her biography in 2016, publishing the first book of the trilogy in 2018 and the second in 2019.

“We’ve been on this journey for a long time,” Barker says. “I’ve become like a son to her, and she is a spiritual mother to my wife and me.”

Barker marvels at the sacrifices Schuiteman made, living so far from home at a time when there was no regular access to telephones, and computers hadn’t yet been invented. “She would go for as much as four years before she saw her mother or sisters,” Barker explains. “She knew she was living in dangerous circumstances. She kept the journals so if she suddenly died, her family would have a record of her life.”

“Zambia Home” will be available March 15 on bookseller websites such as Amazon.com and Christianbook.com, as well as on the publisher’s website, Hendrickson.com.