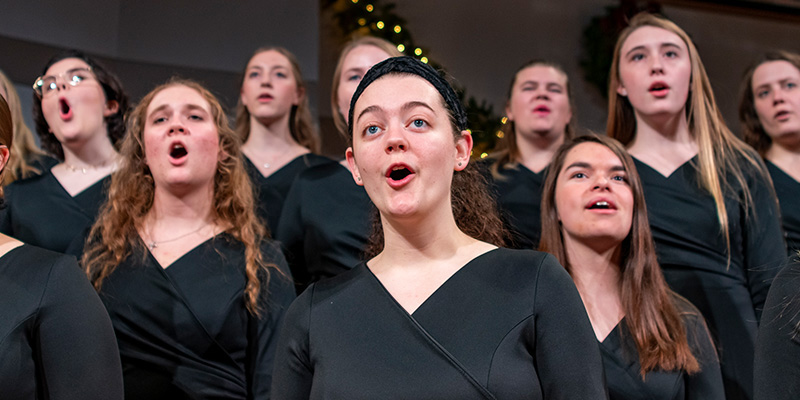 The Women’s Choir will sing a variety of songs celebrating God’s faithfulness and his people’s response of praise. Concert repertoire will include settings of Psalm 23, 37 and 150, as well as Marques L.A. Garrett’s “Sing Out, My Soul” and Byron J. Smith’s “Worthy to Be Praised.” A setting of “Nada te turbe”—based upon text written by St. Teresa of Ávila—will be accompanied by Northwestern cello professor Marian Casey.

The Jazz Band will perform several different styles of music, including Latin charts, popular music and ballads in addition to jazz standards like “In the Mood,” “String of Pearls” and “Sing, Sing, Sing.” Junior Sophonise Nielson will be featured on a few vocal charts, including the song “Respect” made popular by Aretha Franklin during the 1960s.

The Symphonic Band’s concert, with a theme of “Here and Beyond,” will include “Transcendent Journey,” an exhilarating opener by film composer Rossano Galante, and “Soaring With John Williams,” which will feature “Superman,” “Cadillac of the Skies” and “Star Wars.” The program will also include Morton Lauridsen’s “O Magnum Mysterium,” David Gillingham’s “Beside Still Waters” and “Undertow” by John Mackey. Senior music education major Michael Hornback will conduct the ensemble’s performance of “Nitro” by Frank Ticheli.