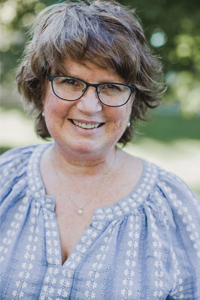 More than 150 years after the worst maritime disaster in U.S. history, the story of the steamboat Sultana takes on new life, thanks to a Northwestern College professor who found inspiration in her own family tree. The Indiana Historical Society (IHS) Press invites readers along for the journey with the release of “Yours: The Civil War, a Love Triangle and the Steamboat Sultana” by Dr. Lila Elliott Sybesma, associate professor of education.

“Yours” is the fictional but historically inspired tale of three young Indiana neighbors and their experiences during the Civil War. While written as romantic fiction for young adults, Sybesma based the book on a 1913 IHS publication, “The Sultana Disaster,” written by her great-granduncle, Joseph Taylor Elliott. Elliott survived the 1865 explosion and sinking in which nearly 1,200 soldiers and civilians perished.

“My greatest joy in writing this book was that I wrote alongside the ghost of my great-granduncle more than a century after his death,” wrote Sybesma in the book’s preface. “Although I never met him, I feel as if I knew him well.”

A specialist in reading and early childhood education, Sybesma crafted the characters of Sarah Sutton and Gabe and Joseph Elliott with the 1913 publication and others serving as inspiration. During the war, the brothers serve with the Union Army, before being taken prisoner and sent to Andersonville prison camp. Meantime, Sarah serves as a nurse in battlefield hospitals, crosses Confederate lines and takes on duties as a spy.

The three friends are reunited aboard the steamboat Sultana, which is returning thousands of soldiers home after the war. Old feelings come rushing back, and it finally seems Sarah will choose one of the Elliott brothers. With both boys vying for her heart, Sarah’s relationship with Gabe and Joseph is put to the test when the dangerously overloaded ship explodes and sinks in the Mississippi River.

“Yours” is available on Amazon and at indianahistory.org. Sybesma’s writing process was aided by funding from Northwestern College Scholarship Grants.

Sybesma is a 1981 Northwestern College alumna who earned a master’s degree in education at the University of Sioux Falls and a Doctor of Education degree in curriculum and instruction, with an emphasis in early childhood education, from the University of South Dakota. She joined Northwestern’s faculty in 2001 after teaching at Sioux Center Christian School for 19 years. She is a former president of the Northwest Iowa Reading Council.