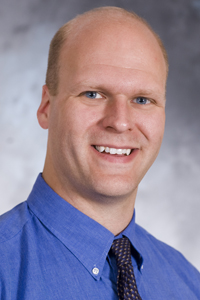 Michael Wallinga, assistant professor of computer science at Northwestern College, has earned a doctorate in computational science and statistics from the University of South Dakota.

Wallinga’s dissertation explored multiple sequence alignment using particle swarm optimization. Particle swarm is a technique that uses hundreds—even thousands—of possible solutions to a problem, represented as particles. During each iteration of the program, possible solutions are moved in the direction of the best known solution, but altered slightly with the hope of finding an even better solution.

“The large number of particles and large number of iterations necessary for this technique make it an ideal candidate for parallel processing and high-performance computing hardware,” he says.

The specific problem Wallinga used to test his implementation was finding the optimal alignment of a set of DNA sequences. A novel aspect of his research was borrowing a technique from computer graphics and animation known as morphing to determine which segments of DNA from each sequence should be associated with one another. His findings were published in the Journal of Health Informatics and Management and presented at the 2017 IEEE Conference on Bioinformatics and Biomedicine.

Wallinga has also worked as a data programmer and analyst for Harbor Group and Interstates Control Systems Inc. in Sioux Center. In addition to teaching in Northwestern’s computer science department, he serves on a part-time basis as the college’s director of institutional research.