Student's artwork explores the relationship between Christ's humanity and divinity 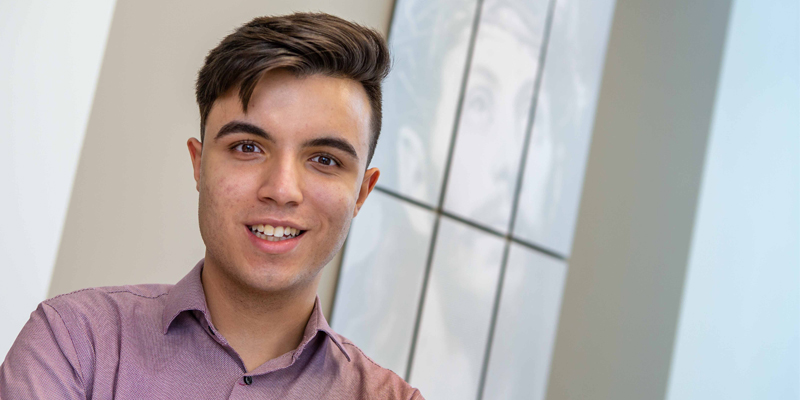 A piece of art recently installed in Northwestern College’s DeWitt Family Science Center has been created for the purpose of getting people to think about the relationship between Jesus Christ’s humanity and divinity.

“Genetic Composition of Christ” is a six-panel metal installation designed by senior Ali Almail, a double major in art and genetics, molecular biology and cellular biology from Bahrain and Canada. The digital artwork features a famous 16th century painting by El Greco of Christ suffering as he carried the cross. Almail produced the image using the nitrogenous bases that code for genes corresponding to prevalent diseases.

Almail began considering this project two years ago as he reflected on Jesus’ humanity. “We always focus on Christ being divine, but we don’t talk as much about his humanity,” he says. “Jesus had a genome—possibly 50% from Mary and 50% from God. Was his genome perfect? Did he possess genes that might have predisposed him to certain diseases, allowing him to share in human suffering at the genomic level?”

The panels represent five genes related to cancer, diabetes and Huntington’s disease, all common in the Middle East, where Christ was born.

Almail says he created the artwork to encourage people to think. “We know that Christ suffered on the cross for our salvation, but did he suffer through some of these diseases? If he did, our connection to him on a human level deepens with a more relatable experience of suffering through an illness.”

Almail seeks to become a physician scientist combining medicine and research. He is in the process of interviewing at medical schools in the U.S. and Canada.

A leader in Northwestern’s International Club, Almail has been a part of Northwestern students’ SEA-PHAGES research seeking to discover phages and sequence and annotate their DNA. He has also served as a research assistant for chemistry and physics professors. In the summer of 2019, he was one of only 12 Christian college students from across North America chosen to participate in the Interdisciplinary Liberal Arts Symposium at Wheaton College in Illinois.

Almail’s artwork, funded by the art and biology departments, hangs permanently in the northeast lobby of the DeWitt Family Science Center. Visitors are welcome.