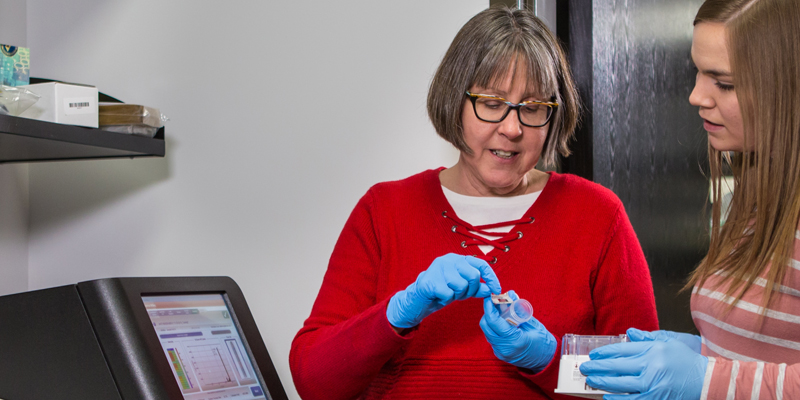 Dr. Sara Sybesma Tolsma, professor of biology at Northwestern College, is among a team of faculty from around the country who contributed to a new publication in PLOS ONE, a peer-reviewed journal that seeks to accelerate the pace of scientific advancement.

The publication, “Genomic Diversity of Bacteriophages Infecting Microbacterium spp.,” was developed last year by Tolsma and other faculty in the SEA-PHAGES program with expertise in bioinformatics. The work was led by the laboratory of Dr. Graham Hatfull at the University of Pittsburgh and involved analyzing microbacteriophages from several clusters and using bioinformatics tools to understand the genetic relationships between clusters.

Northwestern joined SEA-PHAGES, a program offered by the Howard Hughes Medical Institute’s Science Education Alliance, in 2016. SEA-PHAGES gives students the opportunity to contribute to a global effort to discover phages, the term for viruses that infect bacteria. Northwestern is among only two Iowa institutions and 40 baccalaureate colleges worldwide involved in the program.

So far, more than 40 Northwestern undergraduates have peer-reviewed publications as a result of their phage research and discoveries. Northwestern is also one of just 13 colleges or universities worldwide selected for next-level SEA-GENES research.

“Dr. Tolsma is an outstanding teacher who has poured her life into preparing students to be excellent scientists while modeling the same,” says Dr. D. Nathan Phinney, Northwestern’s vice president for academic affairs. “Through her involvement in the SEA-PHAGES program, she has helped provide them numerous opportunities to participate in cutting-edge research, which gives them a distinct advantage as they pursue graduate school or a career. She has also mentored them as they have learned about God’s world and discovered their callings.”

Tolsma, a 1984 graduate of Northwestern College, earned a doctorate in microbiology, immunology and virology from Northwestern University. A member of the faculty since 1995, she received the college’s Teaching Excellence Award in 2015 and was appointed to the Northwestern College Endowed Professorship in 2016. She is an American Scientific Affiliation Fellow and co-editor of Perspectives: A Journal of Reformed Thought.