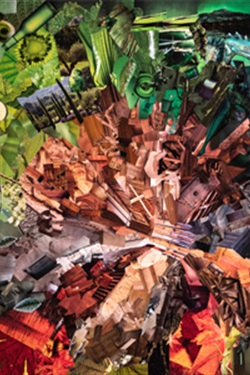 Northwestern College will open its 2018–19 art exhibit season with a show by Sioux City artist Andrea Ignacio. Entitled “Who Watches the Watchers?” the exhibit will be on display in Northwestern’s Te Paske Gallery Aug. 21 through Sept. 14. A public reception is scheduled for Friday, Aug. 31, at 7 p.m.

Ignacio’s artwork is paper collage on canvas or board. She uses a decoupage technique and images cut from magazines to create elaborate, colorful pieces—some as large as four feet in diameter.

“It seems like the value of magazines, and the lifetime of the images within, is so short-lived,” Ignacio says. “I wanted to find a way to give longer life to what I loved most in magazines. Visitors will be met initially from a distance by abstract swatches of colors. Up close they will find masses of individual images culled from dozens of magazines.”

“Empire,” for example, is an elegant piece that looks like sculptured paneling, a Byzantine-like homage of dripping gold. Ignacio describes it as an amalgamation of everything she loves about history, culture, antiquities and design. She worked on “Empire” while hearing about the damage that was being done to Syria’s cultural sites during that country’s civil war.

A chiropractor and former Marine, Ignacio spent 16 years practicing in her clinic near Santa Fe, N.M, and in hospitals and clinics in Saudi Arabia and Bahrain. She had her first solo exhibit in Bahrain in 2016, and her art graced the covers for both the FACT Bahrain and FACT Qatar magazines that same year. Her artwork was also the subject of a feature story in Bahrain Confidential magazine.

Ignacio is one of the Benson Building Artists in Sioux City, where she maintains a studio and participates in their group shows. She also participated in the Orange City Arts Regional Arts Exhibition in 2018, for which her piece, “Metal,” received best-of-show honors.