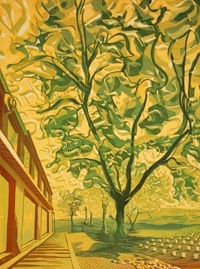 Northwestern College’s Te Paske Gallery will feature prints by Pella, Iowa, artist Eric Robinson Feb. 2–20. Robinson’s exhibit will take place in conjunction with the college’s annual Day of Learning in Community, which has as this year’s theme “The Art of Courage.” The printmaker will be part of the program for the daylong event, scheduled for Wednesday, Feb. 18.

Robinson’s show, titled “Trying to See Through Dim Eyes,” will consist of artwork produced primarily by hand carving and printing from woodcut matrices during the past five years. The exhibition will feature variations of two paintings by Vincent Van Gogh of a sower broadcasting seed and another series of variations exploring the content of the Bible’s book of Job. There will also be many works from a series of miniature prints Robinson calls “Fragments.”

“As a printmaker making edition varia, I emulate what I see demonstrated in life,” Robinson says. “The world consists of ancient things that seem enduring—mountains, great trees, seas and shorelines—yet their appearances change with passages of days and nights, seasons and years, weather conditions and cataclysms.”

Printmaking allows Robinson to make serial variations, which create a kind of third dimension to his work. Those variations provoke thought, he says, because people understand the world by making comparisons.

Robinson’s artwork has been featured in solo exhibitions in Oregon, Maryland, Iowa, Indiana and Illinois, and he’s been part of group exhibitions in states ranging from California to New York, as well as in Canada and China.

The Te Paske Gallery is located in the Thea G. Korver Visual Arts Center, on Highway 10 at 214 8th Street SW in Orange City. Gallery hours are 8 a.m. to midnight Monday through Saturday and 1 p.m. to midnight Sunday.