Rick Clark, instructor in Spanish, has been named the 2019 recipient of the Northwestern Teaching Excellence Award. He was honored during Northwestern College’s commencement ceremony on May 11. 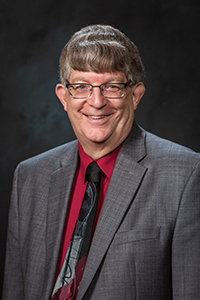 The award is administered by a selection committee made up of members of the Student Government Association along with past award winners and a representative of the Faculty Development Committee. The committee chose Karen Barker, theatre; Dr. Chris Nonhof, education; and Vonda Post, business and economics, as finalists along with Clark. Thirty-nine Northwestern faculty were nominated for the award, with a total of 148 nominations received from students.

Clark, who is retiring this spring, becomes the first three-time winner of the Teaching Excellence Award, having also received it in 2013 and 2007. This is the second year in a row a Spanish professor has won the award; Piet Koene was honored in 2018.

Students described Clark in nominations as having high expectations of himself and his students. “Professor Clark truly loves to teach,” wrote one student. “He comes to school every day wanting to do his best and to help us succeed. He always pushed us to be the best we can be. I never would dare going to his class without being prepared. He is the type of professor you want to make proud; he is putting his all into helping you learn, and you want to give the same amount of effort back.”

Clark tailored his teaching for a variety of learning styles, incorporating an activity or game with textbook work—or pairing a vocabulary quiz with time students could practice speaking Spanish with a classmate. A student said, “He cares for all of his students and goes the extra mile to get students to better understand material.” Another nominator wrote, “He always wanted to make sure we understood the information in class, but he cared way beyond the classroom. Professor Clark cares about your life, your joys and struggles, and your faith.”

Clark, who grew up in Ecuador as the son of missionary parents, regularly led study abroad courses there, as well as mission trips to that country, Mexico, Nicaragua and the Netherlands. His Christian faith was readily apparent in his classes. “Every Monday he would share something God has done in his life,” wrote a student. “Through each of those stories, he sincerely hoped we would leave with a new perspective on who God is.”

A member of Northwestern’s faculty since 1997, Clark also served as an assistant men’s basketball coach, contributing to 14 teams that advanced to the NAIA Div. II national tournament, including the national champion squads of 2001 and 2003.

A graduate of Wheaton College in Illinois, Clark earned a master’s degree in Spanish literature from the University of Northern Iowa. Prior to joining Northwestern’s faculty, he taught for 22 years at the high school level.