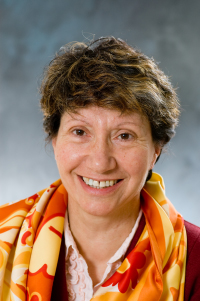 This year’s theme of the IAPCHE conference was strengthening Christian higher education in an era of global transformation. Participants were challenged to address the issues and opportunities of shifting global realities with integrity and conviction. Over 150 attendees from 30 different countries attended the event.

A member of Northwestern’s faculty since 2006, Gonzalez holds interests in how languages function and behave, especially in field related to language in society and meaning. Previously, she served with Wycliffe Bible Translators and the Summer Institute of Linguistics, teaching at the Ricardo Palma University in Lima, Peru.

Gonzalez holds a bachelor’s degree and a specialization in linguistics from Argentina’s Universidad Nacional del Sur, and a doctoral degree from the University of Gottingen in Germany.