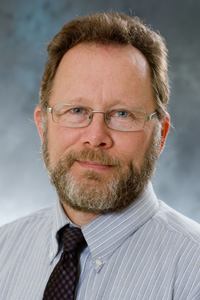 Piet Koene, associate professor of Spanish and department chair at Northwestern College, has been re-elected for a third term to the Board of Directors for the Iowa Interpreters and Translators Association.

A member of the board since 2012, Koene recently led two pre-conference workshops for the organization’s annual conference in Des Moines. He spoke on “Advanced English to Spanish Translation” and “Introduction to Conference Intrepreting.”

Koene is a certified translator and interpreter and is among a small group of people who have reached the top tier of professional legal interpreters in the state of Iowa. In 2004, he was named Iowa’s Professor of the Year by the Carnegie Foundation and the Council for Advancement and Support of Education.

A graduate of Calvin College, he holds master’s degrees in interpretation/translation and Latin American history.