The last event in Northwestern College’s 2013 Deep Song Reading Series will feature poet and novelist Daniel Bowman Jr. on Wednesday, April 24, at 8 p.m. The event will be hosted at The Old Factory Coffee Shop, 110 Fourth St. SW, Orange City, and will also serve as the launch party for the college’s literary arts journal, Spectrum. 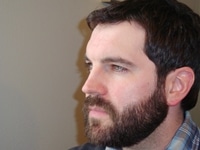 Bowman is an assistant professor of English at Taylor University with specialties in creative writing, poetry and fiction. He earned a Master of Fine Arts degree in creative writing from Seattle Pacific University, a master’s degree in comparative literature from the University of Cincinnati, and a bachelor’s degree from Roberts Wesleyan College. His poems and essays have appeared in The Adirondack Review, American Poetry Journal, The Midwest Quarterly, and journals in Hong Kong, Turkey and India. During the event, Bowman will read from his collection of poems, “A Plum Tree in Leatherstocking Country.”

Bowman has also served as the off-campus judge for this year’s Spectrum, and will be announcing the first, second and third place winners of each genre. Students will have the opportunity to read aloud from their works published in the journal. Copies of both Bowman’s poetry collection and Spectrum 2013 will be available at the reading.