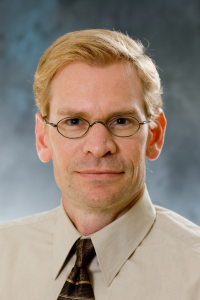 Dr. John Vonder Bruegge, assistant professor of religion and co-director of Northwestern’s Honors Program, has recently published a book, “Mapping Galilee in Josephus, Luke and John: Critical Geography and the Construction of an Ancient Space,” released by Brill Publishers.

The book, which focuses on viewing first century Galilee as a variously mapped space both in ancient writings and current scholarship, is an adaptation of Vonder Bruegge’s 2011 Yale University dissertation.

While in graduate school, Vonder Bruegge participated in an archaeological dig at Tiberias, a prominent city of Galilee during the first century, and his interest grew from there. “Many scholars of the last few decades have focused on Galilee and its archeological remains, assuming that a better understanding of Jesus’ homeland and sphere of ministry would yield a better understanding of Jesus himself,” says Vonder Bruegge. “Yet, at the same time, another field that I call ‘critical geography’ has been developing, and these geographers remind us that places and spaces are not just static backdrops for dynamic historical events.”

Vonder Bruegge realized there were a lot of Galilee scholars and critical geographers, but they weren’t talking to each other about the geographical space of Galilee. His book deliberately routes the two trajectories of scholarship so as to make them collide.

“Critical geography helps us understand the methods ancient authors used when they wrote about Galilee, how dynamic those processes were, and how different they are from the mapping we know of today,” says Vonder Bruegge. “If what we see in biblical texts don’t match up perfectly with what we dig up in an archeological trench, we shouldn’t be surprised. Both are methods of mapping, and both play by different rules.”

Prior to joining Northwestern’s faculty in 2004, Vonder Bruegge served as a research assistant at Harvard and Yale and as a teaching fellow and lecturer at Yale Divinity School. He holds research interests in Christian history and literature, ancient Judaism, the New Testament and archaeology. In addition to studying archeology in Israel and Greece, he also participated in an archaeological excavation in Turkey and leads Northwestern’s honors summer study abroad program in Greece.

A graduate of the University of Missouri, Vonder Bruegge earned a Master of Divinity degree from Covenant Theological Seminary, a Master of Theology degree from Harvard, and a doctorate from Yale.