Northwestern professor featured in speaker series on math and religion 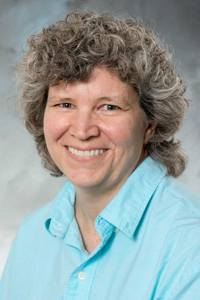 Dr. Kim Jongerius, professor of mathematics at Northwestern College, is one of six presenters featured as part of a national speaker series exploring the connections between religion and mathematics.

Jongerius will speak on “Does God Live in Another Dimension? How What We Assume Shapes What We Conclude.” Her free online talk is scheduled for Sunday, April 25, at 7 p.m. and will be followed by a question-and-answer session. To register, visit templemountsinai.com/Learning/SiS.

The math and religion speaker series is presented by Temple Mount Sinai in El Paso, Texas, as part of “Scientists in Synagogues,” an initiative supported by the National Jewish Center for Learning and Leadership. It is being held in conjunction with the American Association for the Advancement of Science and is funded by the John Templeton Foundation.

In addition to Jongerius, the other presenters include Drs. Larry Lesser, Olga Kosheleva, Vladik Kreinovich and David Novick from the University of Texas at El Paso; Dr. Snezana Lawrence of Middlesex University in the United Kingdom; and Dr. Victor Katz of the University of the District of Columbia.

“I started thinking about the ways my understanding of geometric dimensions could help my understanding of God and what is possible for God. In our three-dimensional world, for example, I think of my skin as an impassable boundary. If I have knee surgery, there will be a hole in my skin. But maybe what I think of as a boundary is really not a boundary at all to our—in my mind—infinite-dimensional God.”

Jongerius has explored connections between the languages of mathematics and faith before. She co-authored chapters on dimension, infinity, and proof and truth in the book “Mathematics Through the Eyes of Faith.” She has a doctorate in mathematics from Colorado State University and is active in the Association of Christians in the Mathematical Sciences, for which she served as a board member for eight years and as president from 2011 to 2013.


The diverse courses of Northwestern’s math department will teach you both analytical and creative problem-solving skills. Northwestern math faculty all hold doctorates and have a variety of specializations. Studying with them will set you up for success in a variety of mathematical fields. Northwestern grads excel on the actuarial science exams and are in high demand by employers.