Orchestra and Women's Choir to perform at Northwestern College 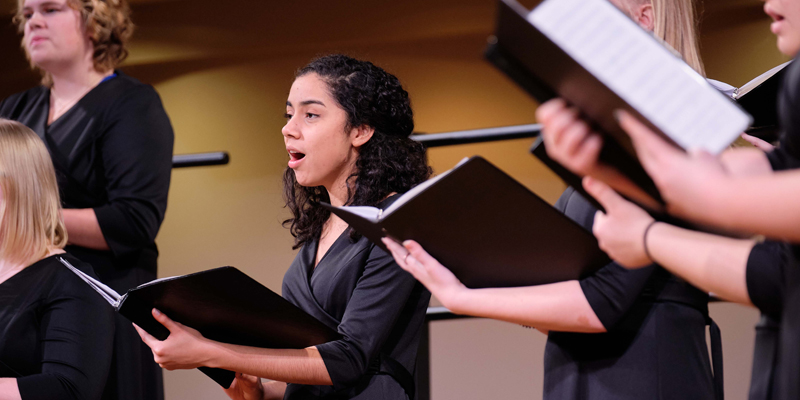 The Northwestern College Orchestra and Women’s Choir will present a concert in Christ Chapel on Friday, April 23, at 7:30 p.m. The event is free and open to the public.

The Orchestra, under the direction of Dr. Juyeon Kang, will open with Beethoven’s “Romance Cantabile in E minor” for piano, flute and bassoon accompanied by two oboes and strings. The ensemble will also perform “Capriol Suite” by Peter Warlock and the first movement of Mozart’s “Symphony No. 41 in C Major, K. 551.”

The Women’s Choir will perform two works arranged by their director, Daniel Sailer: “Were You There?” and “Enter Into Jerusalem.” Percussionists assisting on the latter piece will be Brandon Glasgow, Amelia Holt, Ian Else and Doriann Brockel. Also in the ensemble’s repertoire are “Ave Maria” by Zoltan Kodaly; Aaron Copland’s “I Bought Me a Cat,” arranged by Ken Staker; and John Rutter’s “For the Beauty of the Earth.” Abigail Van Peursem will accompany.

In order to prioritize the safety of the musicians and the audience members, masks will be required for the concert. Physical distancing will be encouraged, with families seated together in groups no larger than three persons.

Kang, a member of Northwestern’s music faculty since 2003, is a professional pianist who has performed extensively on four continents and in the United States. During a 2018–19 sabbatical, she focused on developing her skills as an orchestral music conductor through studies at the University of Music and Performing Arts in Vienna. Kang earned doctoral and master’s degrees at Eastman School of Music in Rochester, New York, and a bachelor’s degree at Seoul National University in South Korea.

In addition to directing the Women’s Choir, Sailer teaches percussion at Northwestern. A snare technician with a wealth of experience in percussion arranging and instructing, he earned a master’s degree at the University of North Texas and a bachelor’s degree at Concordia University of Minnesota. He has performed with the world champion Phantom Regiment Drum and Bugle Corps and pioneered a community music program in Guyana.