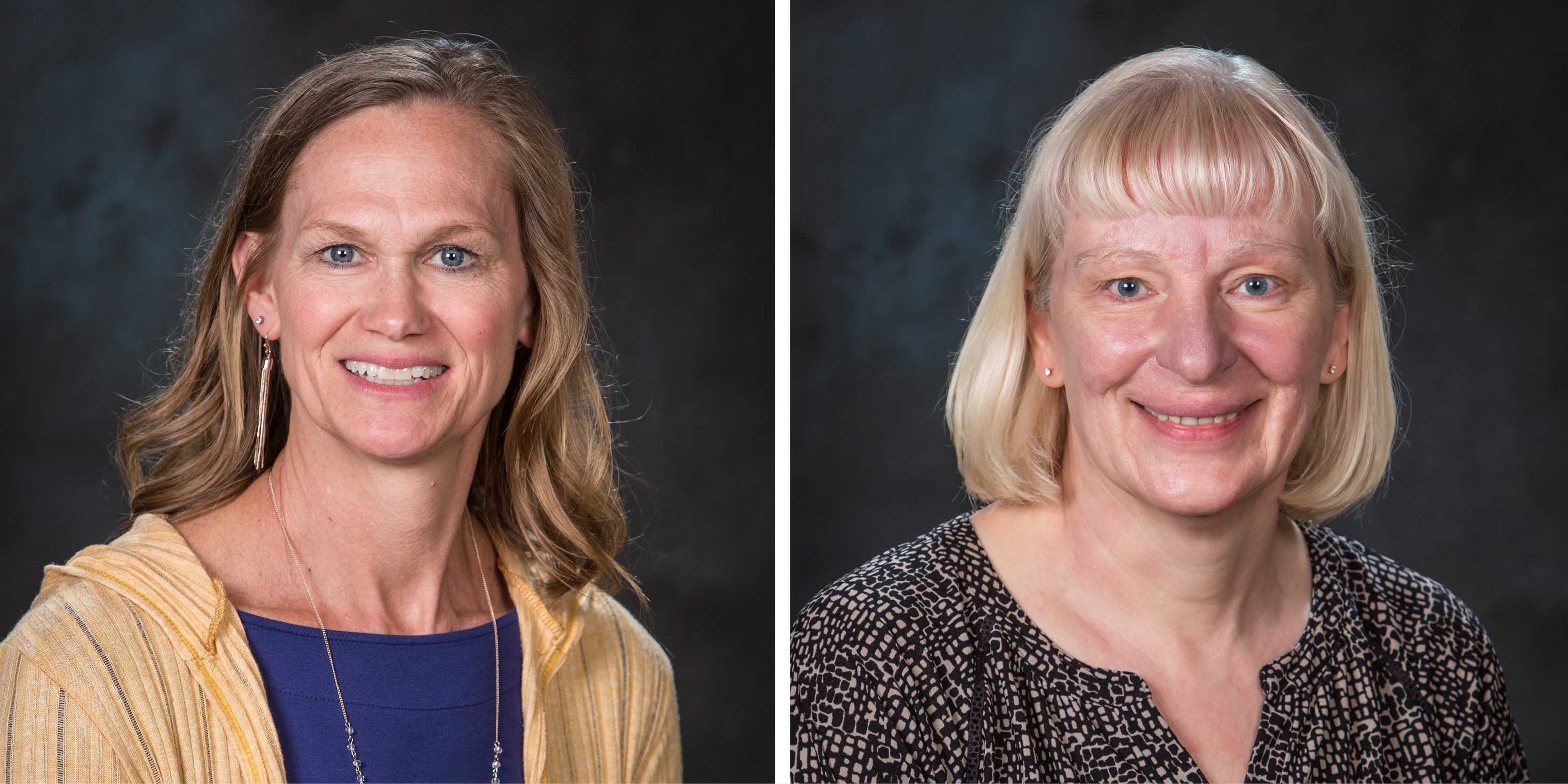 Vonda Post and Janette Reuter are the recipients of Northwestern College’s 2019 inspirational service awards. Post was chosen as the faculty recipient, while Reuter received the staff award.

Both awards recognize employees who go beyond excellence in their performance, have demonstrated a selfless commitment to service, and whose dedication to Christ is apparent in their daily work and interactions. A selection committee composed of faculty and staff chose the winners from among candidates nominated by Northwestern employees.

Post, a Northwestern College graduate, joined her alma mater’s faculty 30 years ago and now serves as a professor of business and economics. In nominating her, colleagues noted that she teaches a full load of classes, advises approximately 60 students, and serves as co-chair of the business department. They describe her as patient, gracious, positive, hard-working and supportive.

“She will always carve out time for a colleague or student, no matter what they need,” says Ashley Stanislav, the department’s faculty assistant. “She puts other people first each and every day and demonstrates the love of Christ through her words and actions.”

Ann Minnick, associate professor of communications, agrees. “I observe Vonda working tirelessly with students in individual tutoring sessions in her office,” she says. “I can hear her explaining concepts over and over to help students grasp them.”

Post’s skill as a teacher is praised by former students like Chris Sietstra, now an accountant for Ernst & Young. Sietstra points out that, based on pass rates, financial accounting is the most difficult portion of the CPA exam. “I don’t think it is a coincidence this was my highest score,” he says. “No one understands and communicates financial accounting principles better than Vonda.”

Post’s commitment to students and Northwestern find expression in many acts of service. “Vonda is always willing to meet with prospective students and is happy to follow up with them through notes and phone calls,” says Stanislav. “Coaches will often reach out to her directly to meet with recruits because they know how well she will represent Northwestern. She understands the importance of the admissions process and regularly goes above and beyond to help bring students here.”

Reuter serves as Northwestern’s comptroller, having joined the college’s staff in 1998. Doug Beukelman, vice president for financial affairs, says she epitomizes one who puts service to others ahead of one’s own self-interest. Despite constant interruptions for advice or counsel, she is always gracious and never makes others feel like they are infringing on her time or duties.

“Janette is a great mentor to the people she supervises while also holding them to high standards of performance,” Beukelman says. “Her own work ethic inspires others to strive for the same level of customer service.”

In his nomination, Beukelman spoke of how Reuter is in demand as a member of numerous working groups on campus. He also cited the important role she plays in the integrity of Northwestern’s financial system—work that has earned her the praise of both the college’s Board of Trustees and its auditor.

“Our auditor is very complimentary of her efforts in preparation for their work,” Beukelman says. “They have described Northwestern College as a model client, and Janette deserves all the credit for that accolade. The continual lack of deficiencies in their audit report is a testament to her ethics and the attention to detail throughout our accounting system.”

Deb Wassink, who retired from the business office in February, describes Reuter as “the most detailed person I have known.” She also fondly recalls the way Reuter is always willing to listen, maintains an open-door policy, and sacrificially rearranges her own schedule to assist others.

“Janette works in the background, but her work keeps all departments doing business properly—and this is crucial to the well-being of the whole college,” Wassink says. “She is serving all of us so very well.”