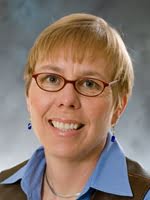 Dr. Lundberg teaches American literature from its origins through the Civil War, Native American literature, and rhetorical studies. Her research examines the literary representation of geology in 19th-century America. More generally, she is interested in how scientific and descriptive writing about the American West contribute to a rhetoric of national identity.

She is also interested in environmental literature, nature writing and ecocriticism, and has presented at conferences for Western American Literature and the Association for the Study of Literature and the Environment. Since 1993, she has worked periodically as a seasonal ranger for the National Park Service, in which capacity she continues to teach and write about geology. Her last posting was at Agate Fossil Beds National Monument in Nebraska

This course functions primarily as an introduction to rhetoric and rhetorical analysis. It is designed to introduce students to the major and the minor in writing and rhetoric. Topics include the rhetoric of ancient Greece, definitions of rhetoric, past and present, rhetorical analysis of texts, and analysis of the rhetor's purpose, situation, genre and audience. Note: Students should attempt to take at least one other course that includes significant writing assignments during the same semester. (2 credits)

ENG250LC offers students an introduction to literary study. The topics of individual sections vary by instructor and semester. After completing this writing-intensive course, students will be able to imagine other lives, times, and places by reading a variety of texts; empathize with characters who have diverse stories and perspectives; analyze different genres of literature using the tools of literary study; craft a coherent essay with a clear thesis and careful textual analysis; articulate ways that literature speaks to and informs their own lives; express delight in God through the beauty of language and literary text; and witness God's presence in the world through literature. (4 credits) (Fulfills NWCore Literary Contexts requirement) Topics include: American Literature and the Rhetoric of Freedom: Americans often regard freedom as the defining characteristic of both their nation and themselves. This course examines how the rhetoric of freedom has been a force in American literature. We will complicate our understanding of American freedom by examining how it has been continually redefined throughout the nation's literary history. We will consider how minority and oppressed groups have used the rhetoric of freedom to advance their own liberation and how Christian religions concepts and language have contributed to this rhetoric. Students will practice reading and writing critically and become familiar with a variety of literary genres, including historical narrative, autobiography, poetry, drama, essays, short stories, and novels. Literature in the World: This course teaches students to appreciate the aesthetic value of literature and consider its cultural contexts. The course explores the beauty of language, the importance of understanding the self and others, and invites readers to consider how literature contributes to our contemporary culture. The course is arranged thematically and content varies from year to year. Themes may include, but are not limited to: immigration, war, poverty, the power of metaphor, and visual art and literature. Literary Imaginations: For literature to be more than ink stains on white paper, we must use our imaginations to give it life. In this course we shall read works from throughout human history and around the world (India, Greece, Italy, England, Russia, Nigeria, Ireland, Japan) to imagine and understand the world that people have believed in, created, and inhabited. The Lives of Others: This course explores 4000 years of stories, from ancient Mesopotamia to the American South. Plays, poems, epics, and autobiographies broaden our perspective on the world and deepen our understanding of being human. Two central themes of the course are perceptions of difference and expressions of faith. Reading, Spirituality and Cultural Politics: As careful, critical readers, we will come face to face with all sorts of strangers, gods and monsters (both mythic and modern) as we journey through New Mexico deserts, English monasteries, modern day American prisons, contemporary Nigerian villages, Aboriginal healing ceremonies, and deep into the heart of Japan's 17th century Samurai culture.

ENG288 - Writing in the Professions

A study of professional writing. In a writing workshop setting, students will learn to adjust style, tone and content to accomplish a definite purpose with an identified audience. They will also learn strategies for creating texts that are clear, concise and accurate. The course is especially useful for those whose career goals require facility in written communication, such as those studying marketing, public relations, advertising, management or law. All students will choose a professional to be their mentor on a writing project related to the career they are interested in. Students will also build a small portfolio of professional writing that includes letters, a memo, a resume and a research report. Prerequisites: sophomore class standing or ACT English score of 30 or above (SAT 680 or higher). (2 credits)

(2 credits)(Writing intensive) A study of some of the best contemporary American non-fiction writing on such subjects as politics, the arts, religion, natural science and medicine. Students write on similar topics and develop their own style by emulating such models. Prerequisites: sophomore class standing or permission of instructor.

ENG297 - The Rhetoric of Persuasion

A study of the methods of persuasion: logical and emotional appeals and trustworthiness, ways of structuring arguments, and persuasive style. Students will learn to create and critique arguments on a variety of subjects. Prerequisites: sophomore class standing or permission of instructor. (4 credits; alternate years, consult department)

A study of prose and poetry in the United States from America's beginnings through the end of the Civil War. The course will focus on the works of Colonial and Romantic writers and the literatures of Native and African Americans. Special attention will be given to defining the qualities and concerns that make this literature distinctively "American." Prerequisite: ENG250LC. (4 credits, alternate years, consult department)

Specific subject matter of this course will vary from semester to semester, but will always focus on an issue in composition studies or a genre of writing. Courses will include both readings and student writing within the genre and will be designed to welcome both majors and non-majors. Note: The course may be taken more than once as long as the topic of study is different. Prerequisite: ENG290WI or ENG292 or permisson of the instructor. (2-4 credits)

America is home to a variety of peoples and literatures; this course focuses on the development of literatures produced by those outside the Anglo-European tradition whose experiences tell a different story about America. The goal of the course is to enrich students' views of the content of American Literature and to familiarize them with a culture or cultures with which they may not be conversant. The course may be taught as African American, Native American, Asian American, or Hispanic American literature. Alternatively, the instructor may choose to focus on literatures in contact and conflict with one another, for example, the turbulent confluence of Native American, Anglo, and Hispanic Literatures of Nueva España. Note: See the instructor for the specific offering before enrolling. This course may be taken more than once, provided a different literature is studied. Prerequisite: ENG250LC (4 credits, alternate years, consult department)

Specific subject matter of this course will vary from semester to semester, but will always focus on an issue in rhetorical studies or a genre of writing. Courses with writing as their emphasis will include both readings and student writing within the genre. Note: The course will be designed to welcome both majors and non-majors. The course may be taken more than once as long as the topic of study is different. (2-4 credits, non-yearly, consult department)

ENG401 - History and Theory of Rhetoric

Designed to provide solid grounding in Greek and Roman rhetorical theory and practice including studies in pre-literate rhetoric and the theories of Aristotle and Plato, among others. Some attention is also given to the Christianizing of rhetorical theory during the Middle Ages. Finally, the course concludes with the examination of trends in contemporary rhetoric studies and topical applications. Prerequisite: junior class standing, ENG235 recommended. Note: Specific subject matter will vary from year to year and might include such topics as a literary period, a national literature, a specific author, or literary genre. This course may be taken more than once provided a different topic is studied. (4 credits; alternate years, consult department)

In this seminar we analyze interpretive problems in literature and their relation to cultural theories and conditions. Particular attention is given to questions germane to Christian experience and thought. (4 credits, non-yearly, consult department)

“‘The Ruins of a Bygone Geologic Empire’: Clarence King and the Place of the Primitive in the Evolution of American Identity.” ATQ Special Issue: Adventure and Exploration. New Series 18.3 (Sept. 2004): 179-203.

“Exploring the Linguistic Wilderness of The Maine Woods.” Reading the Earth: New Directions in the Study of Literature and the Environment. Ed. Michael P. Branch, Rochelle Johnson, Daniel Patterson, and Scott Slovic. U of Idaho P, 1998. 194-210.

“Towards a Thesis-based Interpretation” Legacy: The Magazine for the National Association for Interpretation 8.2 (March/April 1997): 14-17.

Association for the Study of Literature and Environment (ASLE)